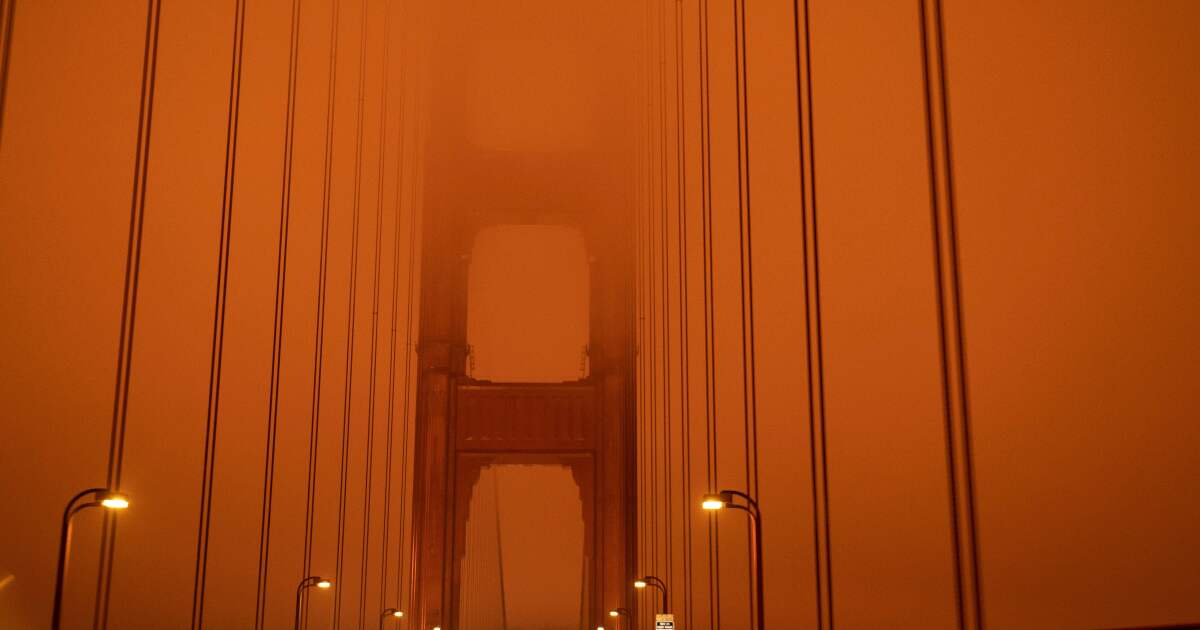 Last month, in one week, the elements raged. Five natural phenomena went haywire at once — heat, fire, cold, wind and rain — in a dissonant September week that began with a temperature spike across the quiet streets and manicured yards of my hometown in the suburbs of Los Angeles.

When I grew up in the tract homes of Woodland Hills, carved out of the sagebrush-covered hills in the San Fernando Valley, we were familiar with the hot blaze of summer. There was a kind of quivering in the air when the temperature hit 95 or 100. We’d run through sprinklers and prance jerkily in our bare feet across the sizzling pavement. I recall the hot winds blowing thorny tumbleweeds into our backyard.

More than four decades later, on Sept. 6, Woodland Hills made history when it reported the hottest temperature ever recorded in Los Angeles County, an astounding 121 degrees — 20 degrees warmer than those hot days I remember so well. At that temperature, the air doesn’t just quiver; it sucks every ounce of moisture out of everything and leaves you out of breath. Thousands of people in my old neighborhood were left without power as the Southern California electrical system buckled under the strain of keeping cool.

And that was just the beginning of an apocalyptic week.

Three days after Woodland’s Hills’ unwelcome entry into the record books, I, like everyone in the San Francisco Bay Area, awakened to a sky without sunshine. Smoke from several Northern California megafires blocked the sun and left us in a filthy orange-brown twilight. Many people overslept, experiencing the same disorientation as that of the birds, whose chirps were absent that day because there was no sunrise and, thus, no morning. The air smelled like an upended ashtray. And that, of course, was nothing compared with the experiences of those who lost their homes and in some cases their lives in the fires.

READ MORE  Nuke Bizzle rapped about getting rich from unemployment claims; feds charge him with doing just that

Those fires, some still burning as I write this, exploded into the Worst Fire Season Ever, in the words of this newspaper. The week was just half-over.

On the other side of the Rocky Mountains, Colorado was hit with freakishly cold weather as the temperature dropped by 55 degrees from one day to the next and a foot of snow fell months before it was supposed to.

Meanwhile, in this race without a finish line, at the end of the week a tropical storm was gathering force in the Gulf of Mexico. It was the first in a spate of storms that exhausted the Roman alphabet for hurricane names earlier in the season than ever recorded.

Within days, Hurricane Sally unleashed violent winds and downpours that devastated parts of Alabama and the Florida panhandle, where power lines were downed and thousands left without electricity.

In a few short days, every element that makes life possible on Earth — the sun, the air, the water — went berserk.

In 2008, a team of scientists convened by the U.S. Geological Survey discovered that rain was no longer falling according to patterns dating back centuries. In scientific terms, the range of fluctuation in rainfall is called “stationarity” — the baseline from which all assumptions about water commence, most notably when it falls and how much. “Stationarity Is Dead” was the title of the study they published in the journal Science and subsequently expanded upon in research over another decade. That simple three-word phrase tells us everything about what is going on now: We can no longer predict the future based on patterns of the past.

READ MORE  About 110,000 Californians have bought a gun since the coronavirus arrived, study says

Their findings were like an alarm going off in our crowded theater of a planet. Water is the key to all life. The same greenhouse gases that are enveloping the Earth in a blanket of rising temperatures are also severely disrupting the ebb and flow of condensation and evaporation in the waterways on land and in the atmospheric rivers above our heads that maintain the equilibrium of the planet.

The term “climate change” barely does justice to the magnitude of changes resulting from these disruptions. A better word might be climate Volatility, with a capital V. Disequilibrium reigns.

Which brings us back to that week in September.

The consequences and costs of that devastating week are still being tallied. One thing is certain: It will cost millions of dollars to help families and communities rebuild from just one week alone, and billions more to respond to the impacts of disasters to come.

And who pays for that?

To answer that question, a scientist affiliated with the Climate Accountability Institute, Richard Heede, analyzed almost two centuries of atmospheric data and cross-referenced it with audits of global greenhouse gas emissions. Heede found that just 20 companies are responsible for more than a third of all greenhouse gases emitted between 1965 and 2017. Four of those companies are American — Chevron, ExxonMobil, Peabody Energy and ConocoPhillips.

Those four American fossil fuel companies alone are responsible for emitting at least 8.5%of all global emissions over the past 52 years. They are the back story to the back story.

Fire and rain have always marked humans’ life on Earth but never before to the extremes we’re recording now, according to a just-released report from the United Nations, as well as innumerable other sources over the last decade. The heat in my hometown, the intensity of the fire in your hometown, the sudden early arrival of cold and snow, the torrential storms in so many hometowns, were sculpted by the hands of man (as it happens, there are no female CEOs in any of the top 20 global oil companies). The companies that contributed to this devastation are known, they have publicly identifiable executives and board members, and they have vast resources.

It’s time for them to pay for their share of the unnatural disasters and mayhem unleashed upon Earth, for the contribution of fossil fuels to the catastrophes of that disastrous September week, not to mention of the record-breaking weeks yet to come.

Mark Schapiro is the author of “The End of the Stationarity: Searching for the New Normal in the Age of Carbon Shock” and, most recently, “Seeds of Resistance: The Fight to Save Our Food Supply.” He is a lecturer at the UC Berkeley Graduate School of Journalism. @schapiro