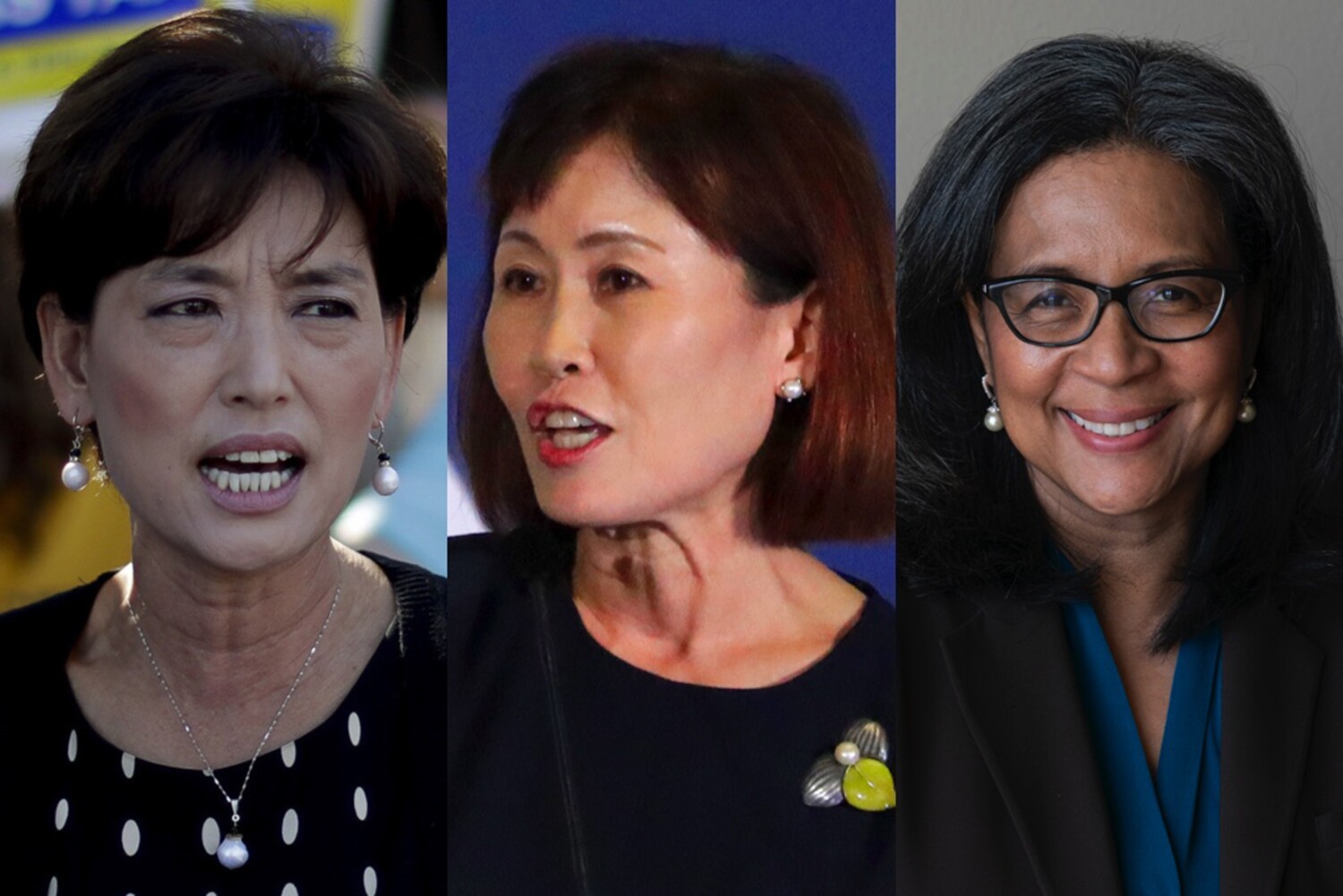 By text, by phone and by social media, they trumpeted the news from California to Asia: Late Friday, Young Kim had joined her “sister” Michelle Steel in making history as two of the first three Korean American women ever elected to the U.S. House of Representatives.

In winning two hotly contested Southern California districts, Kim and Steel helped Republicans push back against the blue wave that resulted in Democrats gaining all seven Orange County congressional seats in the 2018 midterms.

The two Orange County Republicans will be sworn into office in January alongside a third Korean American congresswoman-elect, Marilyn Strickland, a Democrat from western Washington state.

Apart from politics, many Korean Americans said it was a moment to savor.

“How cool is this?” said Ellen Ahn, executive director of the nonprofit Korean Community Services, the largest Korean American social services agency in Orange County. “It’s amazing that women are making inroads on all political platforms.”

For Steel and Kim, the victories go beyond giving California’s beleaguered GOP a boost; they could offer the party a way forward, post-Trump, to appeal to voters outside the white, suburban Republican base.

National exit polls showed that Asian Americans backed Joe Biden over President Trump. Political analysts say there are lessons in the wins by Steel and Kim, which came even though Biden beat Trump in Orange County, and after years of outreach by local Republicans to Asian communities.

“It looked like they were taking Asian votes for granted in the past, so they had to start paying more attention to the communities,” said Karthick Ramakrishnan, a professor of public policy and political science at UC Riverside. “These wins prove the Republican Party is still strong in O.C., and the message they want to share with people is that you have a home in our party.”

In a rematch of their 2018 contest, Kim, a former state Assembly member, defeated Gil Cisneros with 50.6% of the vote in the 39th District, which spans Anaheim Hills to Buena Park and includes parts of Los Angeles and San Bernardino counties. Steel triumphed over incumbent Harley Rouda with 51.03% of the vote in the coastal 48th District, which stretches from Seal Beach to Laguna Niguel. Workers are still counting provisional and mail-in ballots, but the victories are clear in both districts.

The contests were among the most closely watched battles for the House, and coverage in Korean-language media was intense.

Steel, 65, said she wouldn’t be heading to Washington “without teamwork. At this stage, the first feeling I have is relief.

“It’s been tough,” she added. “What made the difference is I stick to my issues, and I’m determined to fight for less government regulations and more aid for the small businesses.”

Kim, 58 — who received a congratulatory call from Cisneros, a Navy veteran and lottery winner turned philanthropist — posted a message on her Facebook page Friday evening. “As an immigrant to America, I know that the promise of America is alive,” she said in the video. “Thank you for your faith in me, and let’s get to work.”

Kim, born in Incheon, South Korea, grew up in Guam before moving to Hawaii, then went to USC to earn a degree in business administration. The mother of four worked for Ed Royce, then a state senator, and stayed on his staff after his election to the U.S. House of Representatives, devoting more than two decades as his community liaison and director of Asian affairs. She served in the California Assembly from 2014 to 2016 and, when Royce retired two years ago, decided to run for federal office.

“Whoever you voted for in this election, I hope you know that regardless of any differences we may have, I will always work on your behalf and fight for you,” Kim said in the video.

Steel, chairwoman of the Orange County Board of Supervisors, signaled her intention to continue creating “stepping stones” to public office for young Asian Americans.

In an interview last week before her flight to the nation’s capital to attend orientation, she reflected on her relationship with Kim. The women’s children are close, and Steel’s mother and Kim’s father-in-law taught at the same high school in South Korea.

“Young and I, we go way back,” she said. “You can be sure we’ll be helping one another, doing projects together.”

Last Tuesday, word of Steel’s election prompted Kim to post to Facebook an old photo of the two hugging. “So excited to see my good friend and sister Michelle Steel win her seat to represent the CA-48!” Kim wrote. “Congratulations on your hard-fought campaign!”

Steel, a mother of two, is the daughter of a diplomat who moved the family from their native South Korea to Japan. She later immigrated to the United States to attend Pepperdine University and earned an MBA from USC. She is married to Shawn Steel, former chairman of the California Republican Party, and has served on the State Board of Equalization.

Ahn said the wins by Steel and Kim “are such a validation of the immigrant experience. Having a person who looks like you and having a seat at the highest level of government can be a game-changer. I hope they don’t forget the issues that affect people of color, and healthcare tops that list.”

Strickland, who served as mayor of Tacoma from 2010 to 2018, challenged legislator and environmental activist Beth Doglio in Washington’s 10th Congressional District, which covers the southern portion of Puget Sound from Olympia to the Tacoma suburbs. Strickland won with 58.1% of the vote.

In the weeks leading to the election, she took part in a Zoom call featuring all five Korean American candidates for Congress, including Andy Kim (D-New Jersey), who won reelection, and David Kim, an immigration attorney who ran unsuccessfully to represent California’s 34th District. “It was remarkable to have us all talking,” Strickland said.

“It’s hardly easy running for national office and, as a woman, just think of the calculations we make before we can jump in,” she added. “Not only do you need to ask, ‘Am I qualified?’; you also have to ask, ‘How’s this going to affect everyone else in my family?,’ as women are the primary caregivers.”

Like Vice President-elect Kamala Harris, Strickland, 58, is of Asian and Black heritage.

“There are still issues of inequities we need to resolve,” she said, “and though I understand my duty to my past, I’m also here to represent all of my constituents.”

The rise of Korean Americans in Congress, particularly of Kim and Steele, is partly the result of significant investment by the GOP to diversify its ranks and launch targeted outreach at Asian American voters starting in 2013, according to observers. Some of those efforts have been obscured by Trump’s actions and caustic comments about immigrants, rhetoric that critics say fuels racism and violence. In March 2018, Steel was the only elected official to greet Trump when he arrived at Los Angeles International Airport on his first official trip to California as president. Kim, meanwhile, publicly criticized the commander-in-chief’s use of the term “kung flu,” saying such language incites hate against Asian Americans.

Ramakrishnan said the GOP’s Growth and Opportunity Project has aimed to transform the party — it set aside $10 million to create better connections with minority communities and spur efforts to recruit and back Asian American candidates.

A preliminary analysis shows that in early returns for Steel, her core support came from affluent white neighborhoods, according to the Orange County Civic Engagement Table.

“I think it was very clear there was an investment by the Republicans in this district,” said Jonathan Paik, the group’s executive director. “Overall, the questions remain for any of the winners: How committed are they to better listen to Asian American voters? Are they still going to represent the most vulnerable communities, the ones most struggling and the undocumented? Yes, the O.C. landscape is shifting, and we’ll all be watching to see how these officials make their mark.”

Both Paik and Tammy Kim — the top vote-getter in the Irvine City Council election, who will assume her new position in January — said outreach by Kim and Steele in Asian languages leveraged their backgrounds to attract the relatively small proportion of Asian Americans in their regions.

“If you believe that every vote counts, they did fully embrace that,” Tammy Kim said, citing Steel’s texts and mailers released in both simplified and traditional Chinese. Both women also appeared on Vietnamese-language television.

Young Kim had an edge over Cisneros who was “shut out by Korean media, though he was a strong advocate for the Korean community through his term and did so much for Korean veterans and adoptees through legislation,” Tammy Kim said.

Some immigrants believe that what helped Kim and Steel cement their victories was a mistake made by Jeff LeTourneau, the vice chair of the Orange County Democratic Party, who shared a Facebook post glorifying Ho Chi Minh, the former communist leader of North Vietnam. His comments led to immediate criticism from politicians of both parties and from the county’s conservative-leaning Vietnamese American community, which backed Trump for reelection.

“Again, Asian American voices are becoming more dominant, as they should be,” Tammy Kim said.

Strickland, the Washington representative, can’t forget how her 91-year-old mother reacted upon hearing that her daughter had cleared a historic hurdle.

“Every generation, people want better for their children. And she was happy about a 14-point victory,” Strickland recalled. “Then she said, ‘Now you have to work really hard to get reelected.’ ”

Share
Facebook
Twitter
Pinterest
WhatsApp
Previous articleSpecial Weather Statement issued November 15 at 5:55AM MST by NWS Pocatello ID – Local News 8
Next articleJust about any adult can run for coroner in Colorado. Could that change?