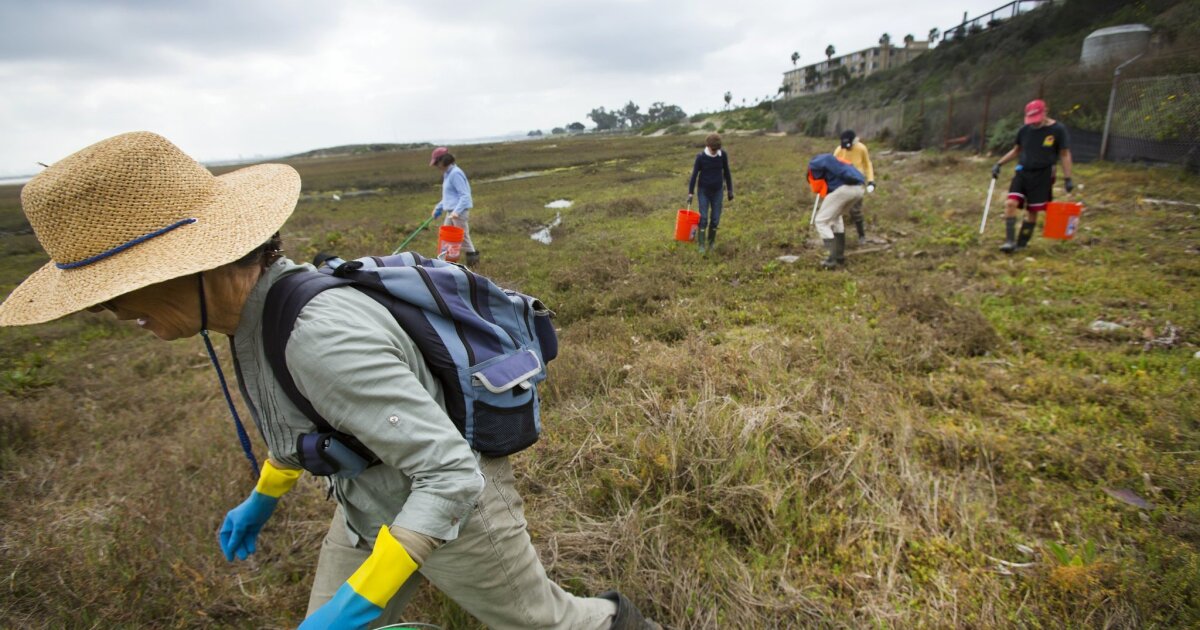 Local environmentalists won a key victory this week when the regional water board approved a $1.25 million study focused on transforming much of Mission Bay’s northeast corner into marshland, which could help San Diego fight sea level rise.

Environmental groups have been in a years-long battle with golfers, campers and recreation advocates over the fate of northeast Mission Bay, which became available for redevelopment five years ago when a mobile home park closed.

City officials opted in 2018 for a recreation-heavy redevelopment plan over a marshland-heavy plan that was favored by environmentalists, and the city has since been conducting a feasibility analysis for the recreation-heavy plan.

Now the city will lengthen the process, which was nearly complete, by an estimated 18 months so it can also study a marshland-heavy option favored by environmental groups.

Once the analyses of both options is complete and presented during public hearings, the City Council will choose one and redevelopment of the area can potentially begin.

Money for the expanded study comes from a $2.5 million fine the San Diego Regional Water Quality Control Board levied on the city this week for a 2016 sewage spill in Tecolote Canyon.

Water agencies are often allowed to devote half of the fine they pay to a water-quality project in the area the agency serves, and the water board approved the marshland study in northeast Mission Bay as the project for San Diego’s fine.

Board members noted that fine money is typically used to complete a project, not just study a potential project. But they also praised the city for considering a project that could fight climate change and sea level rise.

“I really endorse this as a first step,” said board member Betty Olson. “I think it’s a great plan.”

The marshland-heavy plan the city will study is similar to a plan proposed a few years ago by the local chapter of the Audubon Society that is called “Rewild Mission Bay.”

Mission Bay, the world’s largest aquatic park, was a giant marshland before city leaders and the Army Corps of Engineers used dredging and aggressive land movement to create beaches and recreational amenities after World War II.

The Rewild plan includes restoring 227 acres of marshland, compared to 120 acres in the city’s recreation-heavy proposal.

City officials said this week that the new plan they will study would preserve 80 acres of marshland in 2100, so the new proposal would be roughly halfway between Rewild and the city’s recreation-heavy plan when it comes to marshland.

“This is a great step forward by the city to embrace the opportunity in Mission Bay to improve water quality, improve resilience to sea level rise and increase access for all San Diegans,” said Andrew Meyer, the Audubon Society’s conservation director.

But he warned that there are no guarantees that the council will choose the marshland-heavy plan over the recreation-heavy plan.

“I feel like that’s in our court now, to follow — and lead — the city’s work on this new alternative,” Meyer said.

The new plan the city will study does not specify what will happen to recreational amenities that now exist in Mission Bay’s northeast corner, such as Mission Bay Golf Course, or amenities proposed in the city’s recreation-heavy plan.

That plan includes some public-private recreation, camping areas, a restaurant and nature lookout points, while also filling a gap in a popular bicycling path.

The land in northeast Mission Bay is available because the 76-acre De Anza Cove mobile home closed a few years ago after decades of litigation, and the 46-acre Campland on the Bay RV Park is nearing the end of its long-term lease.

City officials decided in 2016 to study possible redevelopment of those two parcels and an additional 90 acres next to the mobile home park that includes the golf course, some tennis courts, ballfields, picnic areas and parking lots.

Every plan under consideration would transform the Campland site into marshland because of its location next to the Kendall-Frost Marsh, a 40-acre nature preserve next to Crown Point that is the park’s last remaining marshland.

Another uncertainty is how the city would pay for redeveloping the park’s northeast corner. Initial estimates say the Rewild plan would cost $63 million and the city’s recreation-heavy plan would cost $44 million. So the new plan would likely cost somewhere in between.

In addition to the new study, the city plans to use $1.25 million in fine money to make upgrades to the Kendall-Frost Marsh and to study the potential for bringing back oysters to Mission Bay by restoring oyster reefs there.

The water board agreed to the $2.5 million fine after a multi-year investigation into a pipe failure in winter 2016 that spewed nearly 6.8 million gallons of raw sewage into Tecolote Canyon and eastern Mission Bay.

The investigation determined city officials were not negligent in following proper procedures and protocols for such spills. If the city had been found negligent, the fine could have been $68 million — $10 per gallon of sewage.

Public access was closed to the creek, canyon and eastern Mission Bay until water samples deemed those areas were safe again.