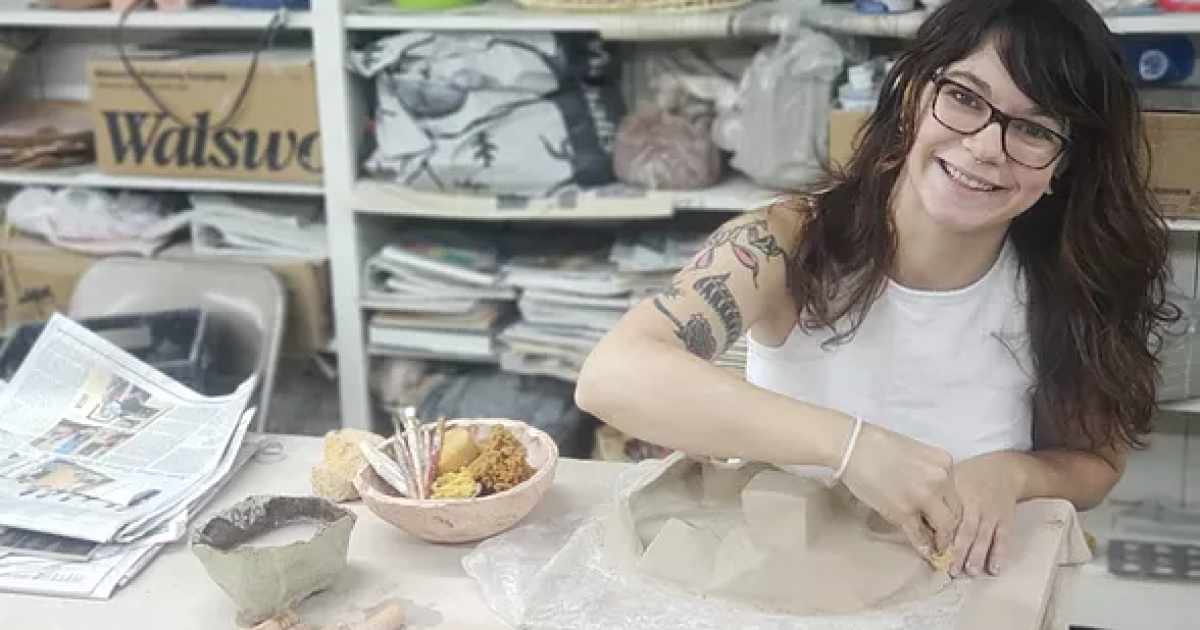 This year millions of cicadas emerged for their once-in-17-years mating season in West Virginia. The insect phenomenon inspired one state artist, who uses cicadas in her artwork.

Cicadas are oval shaped, winged insects that can be as long as three inches. They can be black, brown or green, often with red or white eyes. Their mating calls are thought to sound like “a hissing jet.”

“There’s like, a lot of times that I hear people say, “Oh, my God, these things are so annoying,”” said West Virginia artist Jessie McClanahan. “They just scream all the time, or people are scared of them.”

McClanahan is a 26-year-old ceramic artist based in Charleston. Her work has a natural, organic look – often including plants or insects, specifically cicadas.

“I really love insects. When I was a kid, I was convinced that they were my best friends.”

McClanahan wears her hair in two braids, with thick bangs across her forehead. She has detailed insect tattoos — one of which is a cicada — covering her right shoulder.

“I need their screens to go to sleep. Sometimes, when I leave the South, and I can’t sleep, I have this YouTube video saved on my phone,” she said. “It’s an Appalachian summer nights, and it just has a bunch of cicadas screaming in the background.”

And in the last few years, McClanahan found a way to incorporate cicadas in her ceramics.

“I take cicada shells, and I cast them in clay slip. And then I paint them.”

The cicada shells are actually the skin or exo-skeleton the insect sheds when it emerges from underground. Jessie has gathered shells over the years just from living in the Mountain State, and her friends also find shells for her, too.

This year McClanahan was selected for the emerging artist fellowship for the Tamarack Foundation of the Arts — she is one of five artists chosen in the state. Her cicadas are featured in her work through the fellowship.

In her studio, which is beneath Taylor Books on Capitol Street in Charleston, Jessie dips her cicada shells in the “clay slip” which is the consistency of a mud puddle. She fires the shells twice in a kiln, and in between each fire is when she adds detail to the little creatures, which typically remain a neutral clay color.

She starts by sanding down any fingerprints or rough edges.

“These things are really delicate, so I have to use a fine touch,” McClanahan said while taking cicadas out of the kiln. “This one’s actually a really nice one. He has all his legs. Some of them are missing legs or like their heads are a little wonky.”

Jessie joked that she spends so much time with the cicadas that they take on their own personalities.

“Just like the way that they’re sitting like some of them, their heads are kinda like, obscured by their little claws a little bit more, or some of them like have their claws spread out more and they look sassy or shy.”

She also covers the shells several times with clay and paint to prepare them for the kiln again and to also add detail.

“So I started off with the eyes, and I feel like that determines your personality a lot, too,” McClanahan said.

Cicadas have five eyes — two main eyes and three on top of their heads — which actually help them see the light through the soil so they know when to emerge.

She said her cicadas are not “hyper-realistic” but a loose interpretation, as they are still pieces of art.

She first started using cicadas in her artwork in a college class, mostly out of curiosity, but now she is on a mission to rebrand the insects through her work.

“I want people to love them as much as I love them. Like, they’re unabashedly themselves, you know, and they’re these little creatures that spend all this time underground,” McClanahan said. “And then they finally come out of their ground, and they’re like, “Hey, I’m here.””

Erlandson said she has never seen it done before.

The natural world also plays a part in McClanahan’s other work as a ceramic artist. All of her ceramics are earth-tone colors, ranging from everyday items like mugs and bowls to abstract sculptures. Rather than using a potter’s wheel, all of her pieces are hand shaped, which McClanahan said is more time-intensive, but allows for more one-of-a-kind pieces.

Her signature sculptures look like a clay web in a rounded shape or vessel, sometimes containing plants or flowers or even with cicadas attached to the “webbing.” Erlandson said she interprets the webs as McClanahan’s reaction to her environment.

“She talks a lot about the terrain of West Virginia — how she grew up here, how she is sort of in love with the look of the land, and I see her work as greatly reflecting that,” Erlandson said.

McClanahan said the life cycle of the cicada is representative to her of what is happening in Appalachia right now — when the cicada emerges from the ground it sheds its shell and goes through a “rebirth” and “growth,” charting the region’s process of change.

“We have traditionally made all of our money off of coal mines. That’s not as feasible right now,” she said. “So we see all this change happening within our communities. And like, man, some of it’s not for good, but I see some good happening. We’re going through change, we’re going through a rebirth in some areas.”